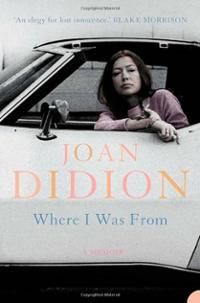 It’s impenetrably white, her world, which to me explains this sentence:

Yet California has remained in some way impenetrable to me, a wearying enigma, as it has to many of us who are from there. We worry it, correct and revise it, try and fail to define our relationship to it and its relationship to the rest of the country. (38)

I don’t have a long and tortured history of wagon trains and leading pioneer families in my relationship to California of course. No grandmothers telling me what life is about in quite that way, no artifacts of long journeys. Some of this history, and its residues in these younger generations, was pretty damn interesting. I suppose it is also pretty damn interesting as a residue of homegrown philosophy amongst ‘us’ Californians, the ones who were white:

Stressing as it did an extreme if ungrounded individualism, this was not an ambiance that tended towards a view of life as defined or limited or controlled, or even in any way affected, by the social and economic structures of the larger world. To be a Californian was to see oneself…as affected only by “nature,” which in turn was seen to exist simultaneously as a source of inspiration or renewal…and as the ultimate brute reckoning, the force that by guaranteeing destruction gave the place its perilous beauty. (66)

Perhaps there were brief flashes when such optimism might have been shared by African Americans — a couple of decades before WWI but after that time white congressmen tried to pass legislation banning all black folks from the state entirely. Before the Klan got quite so popular in the mid 20s.

The genocide of Native Americans was quicker and more complete in California than in many another state, so I doubt their survivors ever felt this to be true.

There’s the difficult relationship with the aristocratic ‘Californios’ who had once themselves owned the land and enslaved indigenous peoples, and then there’s all of the mostly darker skinned ‘Mexicans’ (amongst other uglier names) who worked for them, many of whom had lived there for generations. The other Mexicans who came up for the agricultural and seasonal work and still come up. But now they stay, along with a whole lot more compañ[email protected] because that border and NAFTA is no joke.

We shouldn’t forget the Asian workers brought in to build railroads and pick oranges and grow crops, massacred in L.A., stripped of any ability to own land or become citizens until 1942. The Japanese thrown into concentration camps up and down the state in WWII. California’s history is not at all pretty, and it never was.

White pioneers did not just wrestle climate and geography and dangerous beasts, they came in (to varying extents) as conquerors and oppressors, which is precisely why they could say things like:

and on the same page, why some Californians might be in it all together (against the rest):

I asked my mother to what “class” we belonged.

Because of course, there were a whole lot of Californians below class. Ah, the intersections of race and privilege.

I think it’s this foundation of violent privilege that California is built on that helps explain some of the other things Joan Didion wrestles with, like the 1990s point system for sexual conquests used in Lakewood High School, carried out by boys who called themselves the Spur Posse. It was exposed by a number of girls raped and sexually harassed who came forward. Brave of them, and horrifying the community response, and it’s the kind of thing that needs all kinds of light shining down on it. Light so bright you no longer get parents like Donald Belman, defending their child by describing how the D.A. “questioned all these kids, she found out these girls weren’t the victims they were made out to be. One of these girls had tattoos for chrissake.” (124)

I wish we could talk about reactions like that in the past tense.

I also liked that Didion touches on the shift in California away from free education for all (though she can’t really tell you why) and the real change that took place in the 1980s:

CA no longer feels ‘rich enough to adequately fund its education system.’ the second: ‘many towns in California…so impoverished in spirit as well as in fact that the way their citizens could think to reverse their fortunes was by getting themselves a state prison.”

She sees this is nothing new, just another ‘version of making our deal with the Southern Pacific…making our bed with the federal government.” (183)

I like that she sees that. The contrast between a state that thinks it made itself rich when in fact it took lots of government money, always did and still is. I hate she doesn’t deal with who makes up the majority of those imprisoned, and how they might have arrived there.

I also learned a bit about California’s treatment of mental illness, something I might follow up. Joan Didion cites Richard W. Fox’s study So Far Disordered in Mind: Insanity in California 1870-1930, which found that ‘California had a higher rate of commitment for insanity than any other state in the nation…’ (193)

That’s crazy (unless again, you think about the violence and the ongoing non-acknowledgment of violence). This is also crazy.

‘By the end of 1920, of the 3,233 sterilizations for insanity or feeblemindedness performed to that date throughout the United States, 2,258, or seventy-nine percent, had taken place in California. (195)

Like the prisons, they filled up to and beyond capacity in asylums. California was always big on putting people away apparently, even before three strikes.

This is an interesting book, beautifully written, but deeply infuriating in its blindness to certain things — interesting in itself, but I fear the propagation of such blindnesses.