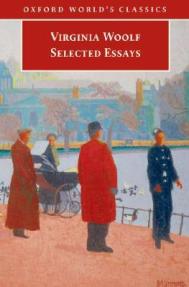 Virginia Woolf’s essays are delightful. Even better, perhaps, after reading The Years, because they resonated so much with the thoughts that the novel provoked in me about that struggle for certainty and voice, the feeling of being unable to feel or think clearly, to communicate. Most fascinating of all, is that in this struggle over what the novel should do, how a novel should be written and read, the role of the author — Virginia Woolf, it turns out, has most decided opinions and a great clarity about the necessary uncertainty of modern writing.

It’s such a strange juxtaposition of security and insecurity.

There is this lovely passage on writing the stream of consciousness, capturing thus the feel and experience of our moments as they shift and change and vanish:

Look within and life, it seems, is very far from being ‘like this’. Examine for a moment an ordinary mind on an ordinary day. The mind receives a myriad impressions–trivial, fantastic, evanescent, or engraved with the sharpness of steel. From all side they come, an incessant shower of innumerable atoms; and as they fall, as they shape themselves into the life of Monday or Tuesday, the accent falls differently from of old; the moment of importance came not here but there; so that, if a writer were a free man and not a slave, if he could write what he chose, not what he must, if he could base his work upon his own feeling and not upon convention, there would be no plot, no comedy, no tragedy, no love interest or catastrophe in the accepted style, and perhaps not a single button sewn on as the Bond Street tailors would have it. Life is not a series of gig lamps symmetrically arranged; life is a luminous halo, a semi-transparent envelope surrounding us from the beginning of consciousness to the end. Is it not the task of the novelist to convey this varying, this unknown and uncircumscribed spirit, whatever aberration or complexity it may display, with as little mixture of the alien and external as possible? (9, ‘Modern Fiction’).

This is certainly the most pure expression of what prose can do but more importantly, what life itself is. How it is lived. What she is trying for in her writing as an expression of that life. It is as luminous as she believes our lives to be.

Most of the essays are less personal, removed from literature as she directs her gaze at it.  She writes of how literature has changed, with much firmness:

And now I will hazard a second assertion, which is more disputable perhaps, to the effect that on or about December 1910, human character changed. …
In life one can see the change, if I may use a homely illustration, in the character of one’s cook. The Victorian cook lived like a leviathan in the lower depths, formidable, silent, obscure, inscrutable; the Georgian cook is a creature of sunshine and fresh air; in and out of the drawing room, now to borrow the Daily Herald, now to ask advice about a hat. (39, ‘Character in Fiction’)

It of course bothers me that she is clearly writing for those who have cooks, not those who are cooks (coming from a family of at least one cook, I’m glad to see life was finally looking up for them), but I have more thoughts on the class issues in another post. Back to her descriptions on this change in 1910 (and surely this must be written before the war, my only fault with this book is that there is no short introduction for each essay giving the time and place published nor is that in the contents — perhaps it is buried in the extensive timeline of Woolf’s life). She writes that Samuel Butler is characteristic of it (and oh the tone of this comment!):

No sooner had the Victorians departed than Samuel Butler, who had lived below-stairs, came out, like an observant bootboy, with the family secrets in The Way of All Flesh. It appeared that the basement was really in an appalling state. Though the saloons were splendid ad the dining-rooms portentous, the drains were of the most primitive description. (33, ‘Mr Bennett and Mrs Brown’)

she includes in this change the plays of George Bernard Shaw. Could it be that they have recognised their own privilege, the limitations of their own experiences and perspectives? A realisation that there is a wonder of other worlds out there beyond their own, and they have value? I wonder, it is food for thought.

In another essay she unpicks further the differences between the novels of an earlier age and her own:

Only believe, we find ourselves saying, and all the rest will come of itself…if you believe it implicitly and unquestioningly, you will not only make people a hundred years later feel the same thing, but you will make them it as literature. For certainty of that kind is the condition which makes it possible to write. To believe that your impressions hold good for other is to be released from the cramp and confinement of personality…
So then our contemporaries afflict us because they have ceased to believe…They cannot make a world, because they are not free of other human beings. They cannot tell stories because they do not believe that stories are true. They cannot generalise. They depend on their sense and emotions, whose testimony is trustworthy, rather than on their intellects whose message is obscure…Set down at a fresh angle of the eternal prosper they can only whip out their notebooks and record with agonised intensity the flying gleams, which light on what? and the transitory splendours, which may, perhaps, compose nothing whatever. (29, ‘How it Strikes a Contemporary’)

Here is another passage in which she ponders the modern in relation to what has come before:

And it is true of the Elizabethan dramatists that though they may bore us–and they do–they never make us feel that they are afraid or self-conscious, or that there is anything hindering, hampering, inhibiting the full current of their minds.
Yet our first thought when we open a modern poetic play–and this applies to much modern poetry–is that the writer is not at his ease. He is afraid, he is forced, he is self-conscious. (77, ‘Poetry, Fiction and the Future’)

These articulate so well the struggles faced by the characters in The Years, afraid of speaking, unable to grasp clarity in their thoughts, awash with a patter of internal dialogue and finding refuge only in feelings.It is the character of an age we experience through them, and through contemporary fiction and poetry.

Like Joyce. She has some quite wonderful digs at Joyce:

Ulysses was a memorable catastrophe–immense in daring, terrific in disaster. (26, ‘How it Strikes a Contemporary’)

Mr Joyce’s indecency in Ulysses seems to me the conscious and calculated indecency of a desperate man who feels that in order to breathe he must break the windows. At moments, when the window is broken, he is magnificent. But what a waste of energy! And, after all, how dull indecency is, when it is  not the overflowing of a superabundant energy or savagery, but the determined and public-spririted act of a man who needs fresh air! (52, ‘Character in Fiction’)

I enjoyed those too much really.

The essays on women and writing held two of my favourite passages — where she is not forced to waste time demolishing idiotic and patriarchal ideas about what and how women should be writing — if they should be writing at all.

The Angel in the House. It was she who used to come between me and my paper when I was writing reviews. It was she who bothered me and wasted my time and so tormented me that at last I killed her. You who come of a younger and happier generation may not have heard of her–you may not know what I mean by the Angel of the House. I will describe her as shortly as I can. She was intensely sympathetic. She was immensely charming. She was utterly charming. She was utterly unselfish. She excelled in the difficult arts of family life. She sacrificed herself daily. If there was chicken, she took the leg; if there was a draught she sat in it–in short she was so constituted that she never had a mind or a wish of her own, but preferred to sympathize always with the minds and wishes of others. Above all–I need not say it–she was pure. (141, ‘Professions for Women’)

I am not nearly grateful enough to all of the women who have fought and made possible the freedom I feel today, but this is still true for us I think:

Indeed it will be a long time still, I think, before a woman can sit down to write a book without finding a phantom to be slain, a rock to be dashed against. (144, ‘Professions for Women’)

There are a few additional insights, overcome to a greater or lesser extent by women writers over the years:

Even in the nineteenth century, a woman lived almost solely in her home and her emotions. And those nineteenth-century novels, remarkable as they were, were profoundly influenced by the fact that the women who wrote them were excluded by their sex from certain kinds of experience (134, ‘Women and Fiction’).

This, her vision for the future:

So, if we may prophecy, women in time to come will write fewer novels, but better novels; and not novels only, but poetry and cirticism and history. But in this, to be sure, one is looking ahead to that golden, that perhaps fabulous, age when women will have what has so long been denied them–leisure, and money, and a room to themselves. (139, ‘Women and Fiction’)

I don’t know about fewer and better novels, I don’t think it’s necessarily a bad thing either that much of women’s writing still centres on the home and her emotions — it is only when that becomes normative, right? But ah, leisure, money and a room to themselves? That is as elusive as ever.

Two other quotes I liked, this one on genre (and why we should stop being so uptight about putting things into just one box):

Books have a great deal in common; they are always overflowing their boundaries; they are always breeding new species from unexpected matches among themselves. (64, ‘How Should One Read a Book?)

Thus in order to read poetry rightly, one must be in a rash, an extreme, a generous state of mind in which many of the supports and comforts of literature are done without. (70, How Should One Read a Book?)

Just reading this sentence makes me feel a little rash and extreme…bring on the poetry!

For more on women and writing…

June Jordan — Who See Me

Women as Tramps: Boarding Houses as Brothels (Pt 3 of 3)

Women on the Tramp: Workhouses and Shelters