Few books I have read so far evoke the experience of wandering Paris quite as much as this one — but is a Paris now gone, rebuilt beyond recognition. Part of the reason he wrote it — to document and fix in place the experience of a geography soon to be destroyed. But first, spring in Paris:

I had just reached this point in my thoughts when, without any warning, spring suddenly entered into the world.

It happened in a flash, one Saturday evening around five: everything is bathed in a different light and yet there is still a chill in the air, impossible to say what has just taken place. (7)

I felt just this way about summer this year, except I missed the moment of its coming, was away for the weekend and returning to London found it installed.

This description of watching women, however, is an unfamiliar experience, and I confess evokes scorn:

Instead of concerning yourself with the conduct of men, start watching women walk by. They are great patches of radiance, flashes of light not yet stripped of their furs, of brilliant, restless mysteries. No, I don’t want to die without having first gone up to each one, touched her at least with my hand, felt her weaken, willed that this pressure shall be enough to conquer her resistance, and then hey presto! (8)

But the obsession with planning and planners something else we share, and a path to be retrodden by the Sitautionists with little reference to this great early psychogeographer as far as I can find (they do write of him ‘We cannot be accepted with the spinelessness of a false eclectic interest, as if we were Sartres, Althussers, Aragons or Godards’*). This, in its first section, is a documentation of the destruction of the arcades:

The great American passion for city planning, imported into Paris by a prefect of police during the Second Empire and now being applied to the task of redrawing the map of our capital in straight lines, will soon spell the doom of these human aquariums. Although the life that originally quickened them has drained away, they deserve, nevertheless, to be regarded as the secret repositories of several modern myths: it is only today, when the pickaxe menaces them, that they have at last become the true sanctuaries of a cult of the ephemeral, the ghostly landscape of damnable pleasures and profession. Places that were incomprehensible yesterday, and that tomorrow will never know.

“Today the Boulevard Haussman has reached the Rue Lafitte,” remarked L’Intransigeant the other day. A few more paces forward by this giant rodent and, after it has devoured the block of houses separating it from the Rue Le Peletier, it will inexorably gash open the thicket whose twin arcades run through the Passage de l’Opéra before finally emerging diagonally on to the Boulevard des Italiens. …It seems possible, though, that a good part of the human river which carries incredible floods of dreamers and dawdlers from the Bastille to the Madeleine may divert itself through this new channel, and thus modify the ways of thought of a whole district, perhaps of a whole world. We are doubtless about to witness a complete upheaval of the established fashions in casual strolling and prostitution… (14)

…the noise, whose low throbbing echoed back from the arched roof. I recognized the sound: it was the same voice of the seashells that has never ceased to amaze poets and film-stars. The whole ocean in the Passage de l’Opéra. (22)

Or the flows and experiences of it than:

At the level of the printer who prints cards while you wait, just beyond that little flight of steps leading down into the Rue Chaptal, at that point in the far north of the mystery where the grotto gapes deep back in a bay troubled by the comings and goings of removal men and errand boys, in the farthest reaches of the two kinds of daylight which pit the reality of the outside world against the subjectivism of the passage, let us pause a moment, like a man holding back from the edge of the places depths, attracted equally by the current of objects and the whirlpools of his own being, let us pause in this strange zone where all is distraction, distraction of attention as well as of inattention, so as to experience this vertigo. The double illusion which holds us here is confronted with our desire for absolute knowledge. (47)

He describes a visit to a tawdry brothel of two rooms, sad and almost sweet — it can’t quite reach sweet as this is a man who sees all women in each individual woman and therefore can see no woman truly. It brought to mind a visit to Tombstone’s Birdcage with its own tiny two rooms side by side and its own sad reality of dingy walls and uncomfortable beds as compared to literary and cinematic representations of such houses of ‘pleasure’ in the wild West — raising the similarities between this representation and that of Paris and of the Moulin Rouge. A false romanticism that this thankfully pushes to one side.

He shares the notices put up to organise protest — text and notices are sprinkled throughout, an early collage:

He describes what this place has meant to a group of people, to a movement

…believe it or not it’s the Restaurant Saulnier. Its two floors, ground and mezzanine, fill the space between the Baths and the transversal corridor that emerges right opposite the entrance of the lodging house. A gift of the gods, this restaurant: I have absolutely nothing to say about it, having eaten there a hundred times. The great quarrels of the Dada movement (you may have heard of the Dada movement?) used to adjourn to this place under something resembling a flag of truce, so that the combatants, who had just spent two hours at the Certa defending their reputations, could discover in a plate of cold meat evidence of the height of morality, the height of fashion… (70)

A quick digression into American cinema and stories of sartorial fashion and race:

Don Juan acquired the taste for this caramel-and-whipped-cream footwear after seeing his first Hollywood film. He scoured Paris to find something similar, and it was at a shop in the Quartier Saint-Georges specializing in tailors’ misfits and undelivered orders that he finally ran to earth this pair of shoes that a Negro, in a moment of glorious extravagance, had had specially made for him, but which a combination of bailiff, cocaine and sheer nonchalance had obliged him to dispense with. (71)

And a return to the Certa: 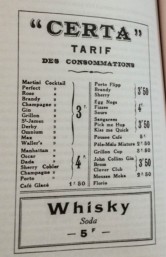 It was while I was sitting here one afternoon, towards the end of 1919, that Andre Breton and I decided that this should henceforward become the meeting place for ourselves and our friends, a choice motivated partly by our loathing for Montparnasse and Montmartre, but partly also by the pleasure we derived from the equivocal atmosphere of the passages. (74)

This is not without an immensity ego of course — this great rambling documentation and discourse published in installments, he had time to receive complaints about the contents as he finished the next installment and writes a description of their contents:

You do them an injustice: what will happen to their rights in the great struggle against the Boulevard Haussman Building Society? What on earth would the lawyers think if by some misfortune they should read your mishmash of inventions and real facts? ‘There’s a bunch of people we can forget about,’ is what they would think. And each of your epithets could bring down the total of the compensation figures a further notch. (85)

We bump thus against the common misconception amongst intellectuals that writing and description are in themselves somehow struggle. You could at least demand that they do no harm, but Aragon is careless of that, his words in print come before the needs of the current residents of the passages. I think of the two women he describes in their two tawdry rooms, receiving his attention for money and finding some sort of connection if he is to be believed — were they just cast into the streets? We’ll never know, his compassion does not extend that far, if it were ever genuine to begin with.

And then that section is done and dusted, we hear no more of it as we move on to philosophies and a drunken night-time adventure in the Parc des Buttes-Chaumont. Which contains much of interest I shall return to in a future post.I can’t really bear to do it here.
In many ways it makes a mockery of this earnest description of all that is about to be destroyed in the name of progress under some vague impression of solidarity. Perhaps that impression is my own and gives him too much credit — or destroys what little he has. Perhaps the term human aquariums in itself sets him to be always observer, though to be sure he does get himself wet. It is not a position I admire very much, but one which is all too familiar.
*’Our goals and methods in the Strasbourg Scandal’ Internationale Situationniste #11 (Paris, October 1967). This translation by Ken Knabb is from the Situationist International Anthology (Revised and Expanded Edition, 2006). No copyright.