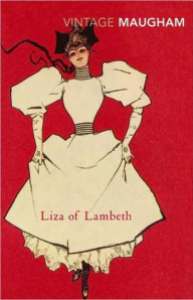 Meh. So you have your misanthrope and your misogynist and this is a little of both, but mostly I found it to be just a morality tale with some sniping at the animal nature and sad lives of the working classes. The kind of thing that makes me want to make a rude gesture when I read the description ‘Maugham’s first published novel – a vividly realistic portrayal of slum life…’ Of course, Maugham trained in obstetrics at St Thomas’s hospital in Lambeth and worked with the residents of Lambeth’s slums, so he knew a little something of the subject. But an outside view, a judgmental view, a superior view that looked down on the people he was being trained to cure. It permeates the novel, even as there seems to me to be some of that voyeurism associated with slumming, assumptions made and perhaps a small amount of jealousy of people he describes as unfettered by middle-class mores, driven by their passions, able to express themselves completely freely, however coarsely and violently that may be.

There’s some interesting views on family, men and Empire as described by Liza’s alcoholic mother as they are getting drunk together near the end of the novel, after Liza has had the shit beaten out of her by the wife of the man she’s having an affair with — and right before she miscarries and dies.

‘Yus,’ went on Mrs. Kemp, ‘I’ve ‘ad thirteen children an’ I’m proud of it. As your poor dear father used ter sy, it shows as ‘ow one’s got the blood of a Briton in one. Your poor dear father, ‘e was a great ‘and at speakin’ ‘e was: ‘e used ter speak at parliamentary meetin’s–I really believe ‘e’d ‘ave been a Member of Parliament if ‘e’d been alive now. Well, as I was sayin’, your father ‘e used ter sy, “None of your small families for me, I don’t approve of them,” says ‘e. ‘E was a man of very ‘igh principles, an’ by politics ‘e was a Radical. “No,” says ‘e, when ‘e got talkin’, “when a man can ‘ave a family risin’ into double figures, it shows ‘e’s got the backbone of a Briton in ‘im. That’s the stuff as ‘as built up England’s nime and glory! When one thinks of the mighty British Hempire,” says ‘e, “on which the sun never sets from mornin’ till night, one ‘as ter be proud of ‘isself, an’ one ‘as ter do one’s duty in thet walk of life in which it ‘as pleased Providence ter set one–an’ every man’s fust duty is ter get as many children as ‘e bloomin’ well can.” Lord love yer–‘e could talk, I can tell yer.’

‘Drink up, mother,’ said Liza. ‘You’re not ‘alf drinkin’.’ She flourished the bottle. ‘I don’t care a twopanny ‘ang for all them blokes; I’m quite ‘appy, an’ I don’t want anythin’ else.’

It’s been such a struggle for poor folks, bilingual folks, Southern folks, Scottish folks, anyone not speaking the Queen’s English, to write true to themselves and their own way of speaking. I don’t know what I think about well educated men writing like this, not without more respect for the people he writes of, not when there’s such a sly superiority in so much of what he writes.

Still, I did love the opening scene, which Liza steals in spite of Maugham really.

All at once there was a cry: ‘There’s Liza!’ And several members of the group turned and called out: ‘Oo, look at Liza!’

The dancers stopped to see the sight, and the organ-grinder, having come to the end of his tune, ceased turning the handle and looked to see what was the excitement.

It was a young girl of about eighteen, with dark eyes, and an enormous fringe, puffed-out and curled and frizzed, covering her whole forehead from side to side, and coming down to meet her eyebrows. She was dressed in brilliant violet, with great lappets of velvet, and she had on her head an enormous black hat covered with feathers.

‘I sy, ain’t she got up dossy?’ called out the groups at the doors, as she passed.

‘Dressed ter death, and kill the fashion; that’s wot I calls it.’

Liza saw what a sensation she was creating; she arched her back and lifted her head, and walked down the street, swaying her body from side to side, and swaggering along as though the whole place belonged to her.

”Ave yer bought the street, Bill?’ shouted one youth; and then half a dozen burst forth at once, as if by inspiration:

It was immediately taken up by a dozen more, and they all yelled it out:

‘Oo, Liza!’ they shouted; the whole street joined in, and they gave long, shrill, ear-piercing shrieks and strange calls, that rung down the street and echoed back again.

‘Hextra special!’ called out a wag.

‘Oh, Liza! Oo! Ooo!’ yells and whistles, and then it thundered forth again:

Liza put on the air of a conquering hero, and sauntered on, enchanted at the uproar. She stuck out her elbows and jerked her head on one side, and said to herself as she passed through the bellowing crowd:

When she came to the group round the barrel-organ, one of the girls cried out to her:

‘Is that yer new dress, Liza?’

‘Where did yer git it?’ asked another friend, rather enviously.

‘Picked it up in the street, of course,’ scornfully answered Liza.

‘I believe it’s the same one as I saw in the pawnbroker’s dahn the road,’ said one of the men, to tease her.

‘Thet’s it; but wot was you doin’ in there? Pledgin’ yer shirt, or was it yer trousers?’

‘Yah, I wouldn’t git a second-‘and dress at a pawnbroker’s!’

‘Garn!’ said Liza indignantly. ‘I’ll swipe yer over the snitch if yer talk ter me. I got the mayterials in the West Hend, didn’t I? And I ‘ad it mide up by my Court Dressmiker, so you jolly well dry up, old jellybelly.’

The man turned on a new tune, and the organ began to play the Intermezzo from the ‘Cavalleria’; other couples quickly followed Liza’s example, and they began to waltz round with the same solemnity as before; but Liza outdid them all; if the others were as stately as queens, she was as stately as an empress; the gravity and dignity with which she waltzed were something appalling, you felt that the minuet was a frolic in comparison; it would have been a fitting measure to tread round the grave of a première danseuse, or at the funeral of a professional humorist. And the graces she put on, the languor of the eyes, the contemptuous curl of the lips, the exquisite turn of the hand, the dainty arching of the foot! You felt there could be no questioning her right to the tyranny of Vere Street.

Suddenly she stopped short, and disengaged herself from her companion.

That is not precisely what she said, but it is impossible always to give the exact unexpurgated words of Liza and the other personages of the story, the reader is therefore entreated with his thoughts to piece out the necessary imperfections of the dialogue.

‘It’s too bloomin’ slow,’ she said again; ‘it gives me the sick. Let’s ‘ave somethin’ a bit more lively than this ‘ere waltz. You stand over there, Sally, an’ we’ll show ’em ‘ow ter skirt dance.’

They all stopped waltzing.

‘Talk of the ballet at the Canterbury and South London. You just wite till you see the ballet at Vere Street, Lambeth–we’ll knock ’em!’

She went up to the organ-grinder.

She caught hold of his big hat and squashed it down over his eyes. The man grinned from ear to ear, and, touching the little catch at the side, began to play a lively tune such as Liza had asked for.

The men had fallen out, but several girls had put themselves in position, in couples, standing face to face; and immediately the music struck up, they began. They held up their skirts on each side, so as to show their feet, and proceeded to go through the difficult steps and motions of the dance. Liza was right; they could not have done it better in a trained ballet. But the best dancer of them all was Liza; she threw her whole soul into it; forgetting the stiff bearing which she had thought proper to the waltz, and casting off its elaborate graces, she gave herself up entirely to the present pleasure. Gradually the other couples stood aside, so that Liza and Sally were left alone. They paced it carefully, watching each other’s steps, and as if by instinct performing corresponding movements, so as to make the whole a thing of symmetry.

Sounds like a forerunner of the Lambeth Walk, and with just as much pride. I quite love her, and wished not just a better life for her, but a better narrator. The book’s available on Project Gutenberg, which makes such long quotes possible…

Somerset Maugham of course, is quite a fascinating character in himself. Liza of Lambeth was popular enough he was able to become a full time writer as I suppose medicine didn’t agree with him. He was one of the most famous and best-paid of his time, but this was after a desperately unhappy childhood after his parents died and he was sent to live with a harsh uncle, and bisexuality must have made life hard during these early days, giving him some edge to his work. He was also called up to work with MI6 — another connection with the borough Lambeth through his work — to aid British efforts to keep Kerensky in power.  We all know how that went, and Maugham went back to writing. He was the lover of the daughter of Peter Kropotkin (!), and married the daughter of Dr Barnardo (!) when she became pregnant with their daughter Liza (!), though he later denied she was his. This is, of course, a terribly truncated summary drawn almost entirely from one website. I may correct this in the future through more reading, but for now be aware the story is undoubtedly more nuanced, complex, and possibly quite different in its main points than the bits that most interested me after a quick scan. Still, as a chronicler of working class life and loves from a female point of view, I’ll take it with more than a grain of salt.

Yesterday's Manchester in sun and shadow

And a little bit of home...

Two, two strawberries! (Mark had the other one) ah

Things that really made my head hurt today.

Things I hate to see through my window just before