It is hard to imagine this area — this border between Lambeth and Balham and Wandsworth — as nothing but fields and farms, even when standing on the edge of Tooting Bec Common on a gray day with a huddle of local residents already chatting happily about their neighbourhood and their memories. Long ago representative of the parishes would meet near here, under a great tree on Brixton Hill, to discuss regional matters. While not representatives of anything in particular, we are examples of inter-borough solidarity and here for a tour held as part of Lambeth Heritage Festival, led by John Rattray of the Balham society.

Part of what we now know as the common was known as Hyde Park Farm, bordered by other farms and would come to be specially known for the quality of its pigs. In 1587 the farm was sold to Emmanuel College, Cambridge, and in honored London tradition, this can be seen in the street names of Emmanuel and Scholars Roads. They used it as an income stream, leasing it out to a succession of local farmers. As times changed the farm became less farm and more market garden, opening up much of the land to become sporting fields. When it was sold it was growing flowers — up for auction were 1,000 roses and 5,000 aspidistras (!). I knew of aspidistras through Orwell and Sayers, but a few of the younger (no one was at all young, I must confess) people had not heard of such things. The group agreed they were particularly Victorian. I am intrigued by the aspidistra, but moving on…

These grounds were the centre for baseball at the peak of its popularity in London. Baseball! That interesting fact was not followed up by our tour guide (being English and not very interested), so I have researched further and that will one day be a post in itself.

There was only a scattering of mansions here alongside the farms, beginning in the 1770s. In looking something else up I discovered that this is near where Hester Thrale lived — so often visited by Doctor Johnson, her home a lively salon of wit and knowledge and probably no little pompousness. The housing built on the old farm site that we wandered through was begun in 1896 at the corner of Radbourne Road and Telferscot Road. The old topography is recorded here as well, the road named after Telfer’s Cottage which once stood here. Somewhere. We stood on the mound on the common’s corner, beneath which lies the old air raid shelter. An earlier tour had called forth an elder who had spent some time down in it during the war, but ours sadly did not.

We paused at the corner, Cosy Corner, where the little shop has recreated the old sign that used to hang there. Many of the folks on the tour had lived in the area for decades, and remembered the two old women who had run the shop from before the war. The lovely kind you don’t see anymore whose lipstick always fought the limits of their lips. We walked down Radbourne Road. Along it developer Ernest Hayes-Dashwood set aside flats to be occupied rent-free by disabled veterans. Beautiful plaques commemorate this gift into perpetuity, even as the hip young professionals obstructed from their doorways by our tour demonstrated that not all of them are so occupied. I investigated that too, of the 150 units, 50 are leased on short-hold tenancies, and the income is used to maintain the rest of the properties. Sensible enough, more information and history can be found here.

There is also a lovely school, some of which was sold off for quite beautiful luxury flats — of course now the school is overflowing and there are portable classrooms. It will be expanding to the north, where an old shed stands, once home to the local scout troop but now falling apart. This area was briefly a site of contention, when ‘Red Ted’ and his gang tried to get the whole thing knocked down to built a large tower of flats and the local residents organised to keep the school. It’s a beautiful school, I’m glad they did, though in general I’d be on the side of housing.

I know about Red Ted — and enjoyed the glee in resident voices as they said the words knowledgeably — but I had no idea Lambeth was a Tory borough until 1971, and in fact is where John Major got his start. Still less did I know that he oversaw housing and lived in an estate here. My mind reeling, I could hardly focus from them on. I do remember the handful of villas left built by Thomas Cubitt as part of the Clapham Park Development — on the grounds of Bleak Hall Farm. 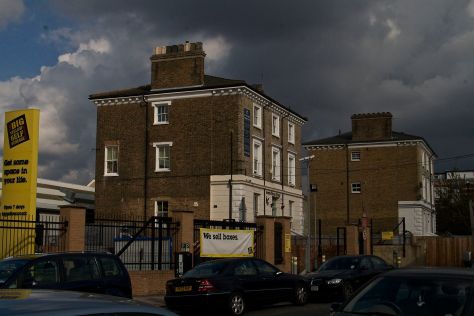 Note to self to look more into that…and into the importance that changing transportation had, as these homes were made less desirable as rail allowed the wealthy to move even further away. Or so the story goes. Also to investigate is Zennor Road, now an industrial estate but once apparently one of the area’s few slums.

A little shy and far from knowledgeable, I said very little, but enjoyed listening to everyone else reminisce about the neighbourhood, several of them as knowledgeable as our lovely and knowledgeable tour guide. It allowed for the creation of a more collective history, as we peeled off track to the left to see the last original iron gate in the area,

heard about resident efforts to preserve the old buildings and stories passed down. New Park Road with its business and splendid diversity feels miles rather than minutes away from these Edwardian row houses and their inhabitants, but it was good to get to know them a little better, and to share their love of their piece of the city.

Just a dad and his son walking their two goats. Ma

Been too long since I caught a very large beetle i

Octopus drawing with the nephew!

Not the owls! (I am longing for my slr camera righ

A plotting of cows...

Fellow traveler, if only for a way...

First year so small but steady and oh so sweet

The biggest nastiest slug I have ever seen. In my