Eugene Sue has raised himself above the horizon of his own narrow world view. He has delivered a slap in the face of bourgeois prejudice.
–Karl Marx

How could anyone resist a back-cover blurb like that? Along with a slap, Sue also delivered a fairly rip-roaring story of good and evil and murder and love and hate and an immensity of sentimentality as it involves both princes and thieves, but really, you can’t care too much about that because it is what it is and it’s entirely enjoyable.

Well, until the last few chapters, maybe even the last third. Sue was just dragging shit out by then. You can tell it was published in 90 installments as one of the first serial novels, but there is something quite wonderful about this sprawling art form published in the Journal des débats from 19 June 1842 until 15 October 1843.

I am so glad Karl Marx found it irresistible.

It opens on the streets in the cité:

a labyrinth of obscure, crooked, and narrow streets, which extend from the Palais de Justice to Nôtre Dame.

Wretched houses, with scarcely a window, and those of worm-eaten frames, without any glass; dark, infectious-looking alleys led to still darker looking staircases, so steep that they could only be ascended by the aid of ropes fastened to the damp walls by iron hooks; the lower stories of some of these houses were occupied by sellers of charcoal, tripemen, or vendors of impure meat; and notwithstanding the little value of these commodities, the windows of the miserable shops were barred with iron, so much did the owners fear the bold robbers of this quarter. (9)

And so we come to the Rue aux Fèves, where our hero Rodolphe saves our heroine La Goualouse (but wait, it’s probably not quite what you think):

and they go to the Lapin Blanc:

It was a long, low room into which they entered, with smoky ceiling and black rafters, badly lighted by the murky rays of a miserable lamp. The whitewashed walls were covered with vulgar sketches, or with sentences in slang; the floor of beaten earth and salt was covered with mud; an armful of straw was placed at the foot of the counter or bar of the Ogresse instead of a carpet, and this was situated near the door, and under the lamp on each side of this room there were placed six tables, one end of each, as well as the benches, nailed to the walls. (15) 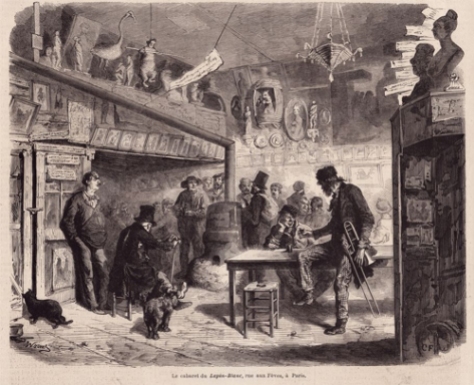 They just don’t build shit like this anymore. Nor would it remain standing much longer. Of course, Sue was probably paid by the word and thus paid to describe in detail, but I am so glad he did. The ogresse watches the bar, rents rooms, and rents clothes to young women — the book never calls her a procures but it is clear she also plays this kind of role. But I won’t give the plot away, wikipedia does that quite well.

This all takes place only a few years before the uprisings and barricades and attempts at revolution in 1848, those heady years fomented in just such small cafes in the cité. It is why Haussman was so determined to demolish them, along with the narrow labyrinths of streets so easily defended. But that all comes later.

There is no hint of revolution here, just greed and some terribly involved crimes and some very simple ones. This is, in fact, rather a reactionary tale — like in the way that blood defines character for example, so when La Goualouse ends up back in prison

I asked some of them who slept in the same room with her what was the cause of the difference [deference? Sic] shown her. ‘That’s more than we can tell,’ they answered: ‘it is plain she is not one of us.‘ ‘But who told you so?’ ‘No one told us: we see it in a thousand things. For instance, lat night, before she went to bed, she went on her knees and said her prayers; as she prays, as La Louve said, she must have a right to pray. (218)

God, the good old days when only the better classes with their blameless lives had the right to pray.

There is a black physician, rescued from American slavery, who is kind and good and wise. That’s a nice change, and almost undoubtedly a jab at America (this nationalist pride probably also explains the English nobleman in humble service of the European Prince). This book is reactionary on the subject of race in every other respect — there’s noticably no mention of Haiti here and I’ll get to Algiers in a bit. But first there is David’s wife who is a creole light enough to pass, and of course she is beautiful and unbalanced and Sue makes a fine art of insulting people here:

Her detestable predilections, for some time restrained by her real attachment for David, were developed in Europe; civilisation and the climactical influence of the North had tempered the violence, modified the expression. Instead of casting herself violently on her prey, and thinking only, like her compeers. to destroy as soon as possible their life and fortune, Cecily, fixing on her victims her magnetic glances, commenced by attracting them, little by little, into the blazing whirlwind which seemed to emanate from her… (283)

There is a great deal more in this vein and she causes an evil man to lose his reason entirely as part of a plot of vengeance on the side of good. That gets a bit confusing, but she’s clearly just in here to ratchet up the sex quotient (hard to do with everyone so good and pure). This involves some quite extraordinary detailed descriptions of her Alsatian costume (she’s in disguise involving a shortish skirt showing some leg and a laced up bodice) that would please the most OCD of fetishists. I know a lot more about race, class and corsets in 1840s France than I did before this book.

There is a whole lot here about female purity and the ways that shame can never be forgotten nor forgiven, the infuriating view that rape is always somehow the woman’s fault and she is never pure as a woman should be after. In fact, she’s better dead or in a nunnery. There’s a whole lot of stupid aristocratic nonsense. The Saxe-Gotha almanach makes an appearance. Another unbalanced woman. Once this story starts heading for these exalted shores it becomes much less interesting I confess. But given my interest in the intertwined histories of Europe and its colonies, it is fascinating that Rodolphe sends the thieves who have repented of their past off to Algiers to forge their new future.

I think in some ways this is the dream that Europeans and white Americans (and white Africans and Australians and etc etc) held to most — that opportunity to go somewhere, find some land, leave behind what you were and reinvent yourself anew. A new chance, a new and better future you define for yourself rather than entrapment into the one you were born into.

…they mutually congratulated each other on the agreeable prospects before them in Algiers.

And so everything was sacrificed, above all those occupying the land that financed and made reinvention possible. Those original occupants had to be made less. Even the infamous empathy of our heroine does not even give a quiver at this:

To end your family of protégés, my lord, I will add that Germain has read in the papers that Martial, a planter in Algiers, has been spoken of with great praise for the courage he has shown in repulsing, at the head of his farmers, an attack of thievish Arabs, and that his wife, as intrepid as himself, had been slightly wounded in the side while she was discharging her gun like a real grenadier. From that time…she has been called Madame Carabine. (365)

That’s one for the women, but only in defense of white privilege to take over farms by conquest. Here the roots of the pied noirs and the bloody conflict stretching across years and decades and as formative of France as it would be of Algeria. As a footnote, but I am always fascinated by just how much the colonies infuse the consciousness and the stories of the colonisers when you look.

For more on Paris…

The City As A Work of Art

The windbaggery of Victor Hugo

Aragon on Gardening and the Phallophoria of Trafalgar Square

Driving the bus! How strange to be on a bus...

Home made turmeric soap (melt & pour being a lazy

Upset I forgot the bread last night, but Sunday ba

Lady Gaga for the win 🤣💕

When my favourite things collide...So. Excited.

Omg anything as exciting as this? #seeds #life #on

Currant filthy disgrace of the doorway to the yard