Is it nice to live in them, work in them, learn in them, play in them? Are they part of the answer to both the housing and environmental crisis?

Long and narrow rectangles of steel, containers are a part of my childhood, forming the long trains that snaked across our landscape. 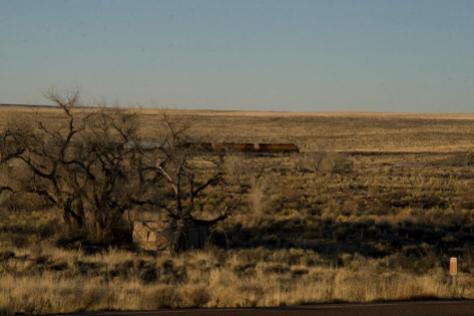 When I moved to L.A., they became part of my landscape in a new way, though I confess I rarely made the trip to the port:

This is the MSC Fabiola, the largest container ship — it’s scale is almost lost in this picture, at 1,200 feet long it can carry 12,500 containers, and only a handful of ports have the capacity to handle its size and depth:

The second series of The Wire exemplifies the size, the feel, the tragedy of automation on the docks. Containers are symbolic of trade, the industrial side of consumption. Now, increasingly they are being used as building blocks for places that form part of our daily lives.

I was surprised to find multiple projects in London, beginning with the Container City Project:

Devised by Urban Space Management Ltd, the Container City™ system re uses shipping containers linked together to provide high strength, prefabricated steel modules that can be combined to create a wide variety of building shapes and can be adapted to suit most planning or end user needs.

This modular technology enables construction time to be reduced by up to half those of traditional building techniques while minimalising on site disruption and remaining significantly more environmentally friendly.

What does significantly more environmentally friendly mean? In looking deeper I found this way to measure the impact of building that takes into account not just the sustainability of heating and cooling it over time, but also the materials involved in its construction, the idea of embodied energy:

There are two forms of embodied energy in buildings:

Direct energy the energy used to transport building products to the site, and then to construct the building; and

Indirect energy the energy used to acquire, process, and manufacture the building materials, including any transportation related to these activities.

The recurring embodied energy in buildings represents the non-renewable energy consumed to maintain, repair, restore, refurbish or replace materials, components or systems during the life of the building.

This reflects all the costs of mining, processing and transporting of building materials, while also the cost of construction and then the ongoing cost of inhabiting and maintaining the building.

Recycling containers in this way is not only far more energy efficient than melting them down and attempting to reclaim the metal, but also far more efficient in terms of construction materials and process. This makes them ideal for building genuinely affordable housing. This is a project from Arkatainer (more pictures here) for a YMCA scheme to provide housing for homeless teens:

This is stripped down and simple, but there is a huge list of container architecture projects from around the world here at inhabitat,  here at altdotenergy, and here at designcrave. Some of my favourites (though surely the more ornate they become, the more glass they involve, the more energy they use): 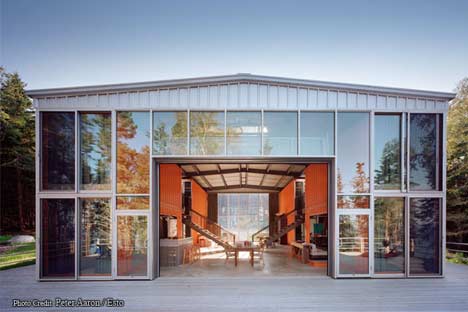 And finally London’s own Container City: 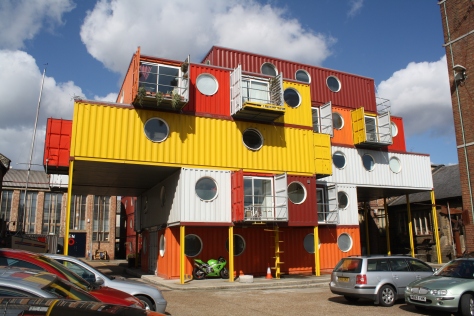 Fascinatingly, Container City was also the title of a 2009 video game (see a walk through here), where the container city was instead a shanty town, a makeshift ghetto built of port detritus, filled with criminals that need to be hunted down and destroyed.

It is the same kind of look but on a massive scale, rusted out, grafittied. It provides a vision of a possible future far removed from the brightly painted and hip constructions now decorating London, and being built around the world. Given a widening inequality, I’m not sure which is a more realistic depiction of our future.