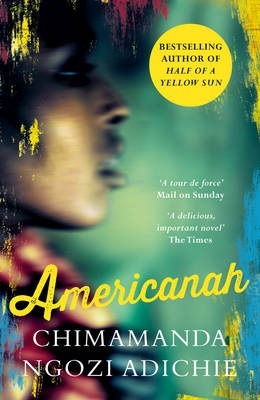 I quite loved Americanah — this story of Ifemelu and Obinze, funny that the fact that it has become a best seller gives me a little more respect for people in general and possibly also the literary establishment. Funny also that my love of it made me realise what a wonderful book it is, as so much of the dramatic arc is centered on relationships in a difficult world and that is not usually something that will grip my attention.

I like my relationships solid and healthy and consisting of mutual respect and taking care of each other — I like them as things I don’t have to think too much about but can just trust. I hate drama in them. I don’t like to spend time talking through them or thinking about them or knowing about how other people do it (or fail to). So I kept wanting an element of the fantastical, a crime, I kept bumping into my own limitations. But I loved this book all the same.

Of course, it is about lots of other things, race and class and loneliness and immigration and shame and the things we do for money and the things that break us and how we heal those breaks or fail to, how we name our integrity and keep it, what we do when it slips. It is about love. It is about change. About being brave.

There was lots to think about, I loved the stories of Nigeria, of the US East Coast, but perhaps because I live in London now, am a little more removed from everything that I was in the US, I can’t help but quote these:

In London, night came too soon, it hung in the morning air like a threat, and then in the afternoon a blue-grey dusk descended, and the Victorian buildings all wore a mournful air. In those first weeks, the cold startled Obinze with its weightless menace, drying his nostrils, deepening his anxieties, making him urinate too often….Sometimes he would stop outside a tube station…and watch the people brushing past him. they walked so quickly these people, as though they had an urgent destination, a purpose to their lives, while he did not. His eyes would follow them, with a lost longing, and he would think: You can work, you are legal, you are visible, and you don’t even know how fortunate you are. (227)

This too rings so true, breaks my heart:

The wind blowing across the British Isles was odorous with fear of asylum seekers, infecting everybody with the panic of impending doom, and so articles were written and read, simply and stridently, as though the writers lived in a world in which the present was unconnected to the past, and they had never considered this to be the normal course of history: the influx into Britain of black and brown people from countries created by Britain. (258)

I also loved Ifemelu’s blog posts on race in the U.S., they were both funny and perceptive, a bit like Black Girl Dangerous:

Here’s the thing: the manifestation of racism has changed but the language has not. So if you haven’t lynched somebody then you can’t be called a racist. If you’re not a bloodsucking monster, then you can’t be called a racist…Or maybe it’s time to scrap the word “racist.” Find something new. Like Racial Disorder Syndrome. And we could have different categories for sufferers of this syndrome: mild, medium, and acute. (315)

This quote is just because I know someone like this:

There were people who were born with an inability to be tangled up in dark emotions, in complications, and Iloba was one of them. For such people, Obinze felt both admiration and boredom (249).

My disinterest in complicated relationships has nothing to do with lack of emotions, and this made me smile as I feel the same.

Anyway. I am looking forward to everything else she has written.

Driving the bus! How strange to be on a bus...

Home made turmeric soap (melt & pour being a lazy

Upset I forgot the bread last night, but Sunday ba

Lady Gaga for the win 🤣💕

When my favourite things collide...So. Excited.

Omg anything as exciting as this? #seeds #life #on

Currant filthy disgrace of the doorway to the yard