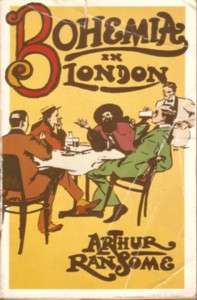 And I do not use the word ‘delight’ very often in the same sentence as Bohemian, and this first quote shows why, describing a tiny Moorish cafe:

Dark hair, dark eyes, sallow-skinned faces everywhere, here and there a low caste Englishman, and sometimes, if you are lucky, a Bohemian in emerald corduroy, lolling broadly on his chair and puffing at a porcelain pipe. Sit down near him, and it is ten to one that you will be engaged in a wordy battle of acting, of poetry, or of pictures, before the sediment has time to settle in your coffee. (122)

It’s all there, the search to inhabit the quaint or the exotic, the dress that attempts both, but also the fascination and joy in all night discussions of things like words. It describes a life of relative poverty, but one you drop down into and you don’t drop all the way — you realise that when they still have a maid or at least someone to bring them their dinner. It’s a mixed bag, but this book has all the best of it. Besides, even C.L.R. James loved his first stay in Bloomsbury.

And then, the poignant, painful self-abandon when at last you are conquered, and a book leads you by the hand to the passionless little man inside the shop, and makes you pay him money, the symbol, mean, base, sordid in itself, but still the symbol that the book has won, and swayed the pendulum of your emotions past the paying point.

I remember the buying of my “Anatomy of Melancholy” (that I have never read, nor ever mean to–I dare not risk the sweetness of the title)… (137)

I have been conquered that way so many times.

On Fleet Street, that I love:

Indeed, Fleet Street, brave show as it is today, must have been splendid then, seen through old Temple Bar, a turning, narrow thorough-fare, with high-gabled houses a little overhanging the pavements, those pavements where crowds of gentlemen, frizzed and wigged, in coloured coats and knee-breeches, went to and fro about their business. There would come strutting little Goldsmith in the plum-coloured suit, and the sword so big that it seemed a pin and he a fly upon it. There would be Johnson, rolling in his gait, his vast stomach swinging before him, his huge laugh bellying out in the narrow street, with Boswell at his side, leaning round to see his face, and catch each word as it fell from his lips. There would be Doctor Kenrick, Goldsmith’s arch enemy, for whose fault he broke a stick over the back of Bookseller Evans, and got a pummelling for his pains. There would be the usual mob of young fellows
trying as gaily then as now to keep head above water by writing for the Press.

And then think of it in a later time, when Hazlitt walked those pavements, with straight, well-meant strides, as befits a man who has done his thirty miles a day along the Great North Road. Perhaps, as he walked, he would be composing his remarks on the oratory of the House of Commons, which he was engaged to report for Mr. Perry of the Morning Chronicle. Or perhaps, if it were Wednesday, he would turn in at Mitre Court, or meet a slim-legged, black-clothed figure with a beautiful head, Charles Lamb, coming out of the archway, or hurrying in there, with a folio under his arm, fresh from the stall of the second-hand bookseller. Perhaps Lamb might be playing the journalist himself, writing jokes for Dan Stuart of the Morning Post. You remember: “Somebody has said that to swallow six cross-buns daily, consecutively, for a fortnight would surfeit the stoutest digestion. But to have to furnish as many jokes daily, and that not for a fortnight, but for a long twelvemonth, as we were constrained to do, was a little harder exaction.” Or, perhaps, you might meet Coleridge coming that way from his uncomfortable lodging in the office of the Courier up the Strand. Coleridge knew the ills of journalistic life. De Quincey “called on him daily and pitied his forlorn condition,” and left us a description of his lodging. De Quincey had known worse himself, but this was evil enough. “There was no bell in the room, which for many months answered the double purpose of bedroom and sitting-room. Consequently I often saw him, picturesquely enveloped in nightcaps, surmounted by handkerchiefs indorsed upon handkerchiefs, shouting from the attics down three or four flights of stairs to a certain * Mrs. Brainbridge,’ his sole attendant, whose dwelling was in the subterranean regions of the house. There did I often see the philosopher, with the most lugubrious of faces, invoking with all his might this uncouth name of ‘Brainbridge’ each syllable of which he intonated with long-drawn emphasis, in order to overpower the hostile hub-bub coming downwards from the creaking press and the roar from the Strand which entered at all the front windows.

And now there are these different Fleet Streets, one on the top of the other, dovetailed together indistinguishably. A building here, an old doorway there, the name of a side street, brings back a memory of one age or another. This tavern, for example, was given its name as a jest by a gay-dressed fellow in long locks, with a sword swinging at his side. there is the street of the White Friars. That building was designed by a subject of Queen Anne. Lamb walked past while those offices were still cradled in their scaffolding.

On a sunny morning there is no jollier sight in all the world than to look down Fleet Street, from a little below the corner of Fetter Lane on that side of the road. The thorough-fare is thronged with buses–green for Whitechapel, blue going to Waterloo Bridge, white for Liverpool Street, gay old survivals of the coaching days… (154)

This is youth and joy and excitement in words, paintings, life lived to the fullest in long nights drinking and talking and drinking and talking some more. It is a different kind of devotion to literature or art, made possible by relatively cheap lodgings (oh London, you don’t know what you are destroying) and some limited freedom from the life of toil. It is life best in its full flush of youth, when a small sum earned from an article feels like gold and is spent on wine before age and children and the fight for survival has stripped all the joy away (Gissing makes this world hard to imagine in New Grub Street, but I believe that at times and for some it was really there).

It is an age long gone I think. But we still laugh and stay up all night talking over wine. Just not as picturesquely.

There is a description of the loveliest wedding party ever in Soho, gossip and chit chat galore. Plenty to smile at. But this is also an immensely erudite collection of who said what where in these little corners of the city Ransome loves.

So back to Fleet Street, he gives a list of pubs and clubs and the people who met there and the poems and epigraphs that they wrote, the discussions they had and, well, it is inspiration to go drinking I must say. But you cannot do them all at once, as he writes:

To sup with ale at the Cheshire Cheese, to drink at the Punch Bowl, at the Green Dragon, at the Mitre, at the Cock, at the Grecian, at the George, at the Edinburgh — in short, to beat the bounds of every tavern in Fleet Street, from Ludgate Circus to the Strand, that is a festival too peripatetic to be comfortable, an undertaking too serious to be lighthearted.

But one at a time? Oh yes. The Cheshire Cheese is already much beloved by me, so I shall just end with the description of that one:

ar down on the Fetter Lane side of the street there is the Cheshire Cheese, still the dirty-fronted, low-browed tavern, with stone flasks in the window, that it was even before Johnson’s time. Here, so people say, Johnson and Goldsmith used to sup and be merry with their friends. Perhaps it vv^as the haunt of one of the talking clubs of which neither of them was ever tired. Although it is nowhere written that Johnson crossed the threshold, it is very unlikely that the man who asserted that “a tavern chair was the throne of human felicity” could have neglected such an opportunity as was his. For he lived for some time in Wine Office Court, in whose narrow passage is the entrance to the tavern, and I doubt if he could have passed it every day without finding some reason for encouraging it. Indeed, with Macaulayic logic, they show you Johnson’s corner seat, the wall behind it rubbed smooth by the broadcloth of innumerable visitors, “to witness if they lie.” It is a pleasant brown room, this, in the tavern, with Johnson’s portrait hanging on the wall, old wooden benches beside good solid tables, and a homely smell of ale and toasted cheese.Here many of the best-known journalists make a practice of dining, and doubtless get some sauce of amusement with their meat from the young men and girls, literary and pictorial, destined to work for the cheap magazines and fashion papers, who always begin their professional career by visiting the Cheshire Cheese for inspiration. Up a winding, crooked, dark staircase there are other rooms, with long tables in them stained with wine and ale, and in one of them the Rhymers’ Club used to meet, to drink from tankards, smoke clay pipes, and recite their own poetry. (161-162)