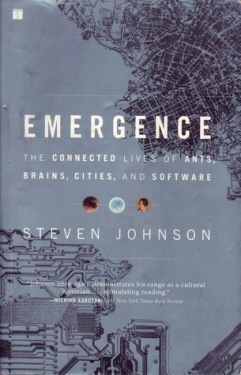 Nabeel Hamdi in his book on development constantly refers to the idea of emergence, which he draws from this book by Steven Johnson. Another bit of pop science applied to the world and I wasn’t too sure I wanted to read it. Somehow I was convinced by its shortness, and the blurb from J.G. Ballard – ‘Exhilarating’.

This is a bit Ballardian. Though it has no car crashes, sharp angles or sex symbol references.

In August 2000, Toshiyuki Nakagaki announced he had trained slime mould to travel the fastest route through a maze. Pretty amazing.

More amazing was that it turns out slime mould does not have a few cells that order all the rest around as had previously been assumed, but that given the right conditions, its components–often happily trawling about on their own doing what they do–each put out a call to join together and take advantage of opportunity and thus collectively do what they could not on their own. If you can use such human words to describe a very different process.

So when this books was very broad I found it thought-provoking, and the narrower it got the higher my frustration.

I did  like the breadth of what it drew on, going from slime mould to ants to Engels writing about Manchester – and I liked that it provoked me to think something slightly new about this classic with a quote I hadn’t noted in my own reading:

I have never elsewhere seen a concealment of such fine sensibility of everything that might offend the eyes and nerves of the middle classes. And yet it is precisely Manchester that has been built less according to a plan and less within the limitations of official regulations–and indeed more through accident–than any other town. Still…I cannot help feeling that the liberal industrialists, the Manchester “bigwigs,” are not altogether innocent of this bashful style of building. (37)

But Engels went on with Marx to look at some of the things structuring this apparent accident, principally capitalism and the exploitative hierarchies it creates. How some of this emergent behaviour interlocks with these structures is what is actually what I find most interesting, and discussing ’emergence’ as though this emerging takes place on a blank canvas rather than into a world of structural inequality and oppression which act to shape it is deeply problematic. I would like a dialectical understanding of such things, how horizontal emergence articulates with structure. Maybe changes it for the better.

This book doesn’t do that.

The fact that it doesn’t do that makes it possible for Johnson to note hopefully that Al Gore is a fan of complexity theory! And in the same paragraph to describe corporate mantras of bottom-up intelligence and also the organising of the radical antiglobalization movement protest movement. Isn’t it all fascinating.

The science stuff is fun though, like the fact that ant colonies follow a lifecycle over 15 years (well, Arizona carpenter ants do — and I know those large bastards well with their amazing foraging lines that change every night, stripping a new plant of everything and leaving others alone). This, despite the fact no ant lives more than a year, thus the puzzle of:

The persistence of the whole over time–the global behaviour that outlasts any of its component parts–is one of the defining characteristics of complex systems. Generations of ants come and go, and yet the colony itself matures, grows more stable, more organized. (82)

This reminded me of the corruption and violence of the Yorkshire police in the Red Riding trilogy. But we are not ants. I like the fact that the Sim city game failed when the people were made too smart, instead they had to be dumbed down, fixated on one thing. Like ants.

Sim city may play with a form of emergence, but it is still limited by programming and the extent of its programmers imaginations of what cities are.

For most people, the sight of their first digital town sprouting upscale neighborhoods and chronically depressed slums is downright eerie, as though the hard math of the digital computer had somehow generated a life-form (88).

That was slightly infuriating, but I was raging as he continued in that vein:

Neighborhoods are themselves polycentric structures, born of thousands of local intersections, shapes forming within the city’s larger shape. Like Gordon’s ant colonies, or the cells of a developing embryo, neighborhoods are patterns in time. No one wills them into existence single-handedly; they emerge by a kind of tacit consensus : the artists go here, the investment bankers here, Mexican-Americans here, gays and lesbians here. The great preponderance of city dwellers live by these laws, without any legal authority mandating that compliance (91).

I did my PhD on this shit, and the multitude of books that tear this thinking into pieces are easily found in the case of the U.S. How dare he ignore years of racial covenants, and discrimination of all kinds, the immense amount of hate and violence that has gone into disciplining people of colour and people of different sexualities into their own neighbourhoods where at least they can feel safe.

Laws mandated compliance with racial segregation until 1953 in the US, the planning profession’s obsession with homogeneity and separation of land-use has been policy for a hundred years, and unofficial policies and blatant discrimination still exist. We cannot forget the legacy of violence and issues with race and definitions of ‘American’ as white and etc. resulting from the conquest of the US and slavery that are even now being fought out in Ferguson and Baltimore and cities all over the country.

There is a lot more wrong with this idea, but in a nutshell: patterns do naturally emerge, but American cities at least do not reflect any such ‘natural’ patterns arrived at through tacit consensus. The idea would be laughable if it did not write off and deeply insult centuries of struggle by people of colour, poor people, lbgtqi communities to live where they choose with some level of dignity. That still hasn’t been won.

This is why I hate using an idea emerging from slime mould, and other such biological marvels, to say ‘this is how cities work.’ To explain what is created by human beings. It simplifies and ignores what doesn’t fit. Sadly our cities, our slums, our uprisings are all things we have actively created and fought over.

When do I like playing with an idea such as emergence? When it does not seek to explain, but rather shifts our frame, maybe makes us see things in a different way. Notice what we hadn’t before. When metaphor opens up insight.

There are manifest purposes to a city…But cities have a latent purpose as well: to function as information storage and retrieval devices. Cities were creating user-friendly interfaces thousands of years before anyone even dreamed of digital computers. Cities bring minds together and put them into coherent slots. Cobblers gather near other cobblers…Ideas and goods flow readily within these clusters, leading to productive cross-pollination…The power unleashed by this data storage is evident in the earliest large-scale human settlements (108)

Again, still a bit problematic in its simplifications, but the idea of the city as a giant centre of information storage and retrieval is quite cool, fun to play with and think about.

I also liked the recognition that in studying communications and discourse these days, ‘We need a third term beyond medium and message’ (161). We need something that gets at how we are filtering things, accessing them. The web really has opened things wide up, but how are people being channeled, how do they figure out where to look and what is worth looking at?

Near the end Johnson gets to the question of what this can do for politics. Same issues as raised by what this can do for cities — things aren’t just emerging onto a level playing field so how emergence deals with existing structures of domination is the real question. That what makes its embrace by the right-wing who are anti-big-government in everything but the monopoly of force, and by the radical left so different.

In fact, the needs of most progressive movements are uniquely suited to adaptive, self-organizing systems: both have a keen ear for collective wisdom; both are naturally hostile to excessive concentrations of power; and both are friendly to change. For any movement that aims to be truly global in scope, making it almost impossible to rely on centralized power, adaptive self-organization may well be the only road available. (224)

Possibly true, but the capacity of capitalism to co-opt so much demands of us much more of a stretch in our thinking about how this actually can create a positive change in the world that goes to scale.

March! RMT have a brass band! We're sticking with

Found it so hard to think/write/be while an academ