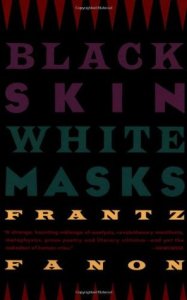 Another classic I am long overdue in reading, though I loved Wretched of the Earth and it’s now higher on the list to be read again.

There is a controlled anger in his writing, made possible by distance.

This book should have been written three years ago. . . But these truths were a fire in me then. now I can tell them without being burned. These truths do not have to be hurled in men’s faces. They are not intended to ignite fervor. I do not trust fervor (11).

I like hurling truths, but laying them out eloquently and  clearly often works better. I feel that rage demands at least this clarity, perhaps this is why much modern theory frustrates me. As for fervor, I don’t always trust it either.

I enjoy the occasional burst of a lyrical passage:

There is a zone of nonbeing, an extraordinarily sterile and arid region, an utterly naked declivity where an authentic upheaval can be born. (10)

But above all I love tying psychological analysis to material conditions. Seems to me another form of oppression to deny the role (and thus culpability) that conquest, physical oppression and racism have played in forming our psyches.

If there is an inferiority complex, it is the outcome of a double process:
— primarily, economic
–subsequently, the internalization–or, better, the epidermalization–of this inferiority.

The black man must wage his war on both levels: Since historically they influence each other, any unilateral liberation is incomplete, and the gravest mistake would be to believe in their automatic interdependence (13).

Seems to me we need to think about how we reclaim this, heal this. On both levels.  It affects everyone, the violence of this relationship does not harm only those on the receiving end of it.

I was thinking this when reading Virginia Woolf, and this brought to mind Faulkner, who has always epitomised to me the terrible harm that a slave-owning society causes to those supposed to be its beneficiaries. Fanon picks up on this later, this connection between the colonial and the familial writing

In Europe and in every country characterized as civilized or civilizing, the family is a miniature of the nation. As the child emerges from the shadow of his parents, he finds himself once more among the same laws, the same principles, the same values (142).

The horror of Colonial laws, principles, values. Greed mostly. Fanon goes on to quote work by Joachim Marcus who finds that conflictual family structures produce social neurosis, ‘abnormal behaviour in contact with the Other’ (158, footnote 23).

This does not shift where the greatest pain and damage lies.

what is often called the black soul is a white man’s artifact (16).

Let us have the courage to say it outright: It is the racist who creates his inferior. (93)

As everyone has pointed out, alterity for the black man is not the black but the white man. (97)

The ways in which colonialism have twisted worth up with language and skin. There is great insight here into words, the ways that power relations warp language and our appreciation of it, the meaning we give it.

The Negro of the Antilles will be proportionately whiter–that is, he will come closer to being a real human being–in direct ratio to his mastery of the French language. I am not unaware that this is one of man’s attitudes face to face with Being. A man who has language consequently possess the world expressed and implied by that language (18).

The ways that this also marks ‘rubes’ from the country vs the city. England is perhaps the prizewinner in building hierearchy by accent, but the level of English spoken too often seems to define the respect granted to others wherever I have lived. Or traveled. Another terrible kind of violence, as is talking down:

To make him talk pidgin is to fasten him to the effigy of him, to snare him, to imprison him, the eternal victim of an essence, of an appearance for which he is not responsible (34)

But this is not simply to be accepted.

From the moment the Negro accepts the separation imposed by the European he has no further respite and “is it not understandable that thenceforward he will try to elevate himself to the white man’s level? To elevate himself in the range of colors to which he attributes a kind of hierarchy?” (quoteing Claude Nordey, L’homme de couleur (Paris, Collection “Presences,” plon, 1939)

We shall see that another solution is possible. It implies a restructuring of the world. (81-82)

Isn’t about damn time we restructured the world? Who can bear it as it is?

There is a long quote from Karl Jaspers, (La Culpabilite Allemande, Jeanne Hersch’s French translation, pp 60-61 — reading Hannah Arendt put him on my list of things to read many years ago, but he is hard to track down). It’s a quote I think at the end of the day I agree with, but don’t know what to do with exactly, apart from choose my battles and fight them to the best of my ability…

There exists among men, because they are men, a solidarity through which each shares responsibility for every injustice and every wrong committed in the world, and especially for crimes that are committed in his presence or of which he cannot be ignorant. If I do not do whatever I can to prevent them, I am an accomplice in them. If I have not risked my life in order to prevent the murder of other men, if I have stood silent, I feel guilty in a sense that cannot in any adequate fashion be understood juridically, or politically, or morally . . . . That I am still alive after such things have been done weighs on me as a guilt that cannot be expiated.

Somewhere in the heart of human relations an absolute command imposes itself: In case of criminal attack or of living conditions that threaten physical being, accept life only for all together, otherwise not at all. (89)

I want to accept life only for all together. I want to make this world. Sadly the world as we have created it now is one of the exploitation of the many, the destruction of the natural world. These things demands solidarity for each and all in their oppressions, as much as we can give. Fanon recognises this, taught me that in the French colonial hierarchy a native of the Antilles was higher than an Arab– another marker of the shifting boundaries of race, religion and hierarchy–and makes his stand:

Whenever I see an Arab with his hunted look, suspicious, on the run, wrapped in those long ragged robes that seem to have been created especially for him, I say to myself, “M. Mannoni was wrong.” Many times I have been stopped in broad daylight by policemen who mistook me for an Arab; when they discovered my origins, they were obsequious in their apologies…every citizen of a nation is responsible for the actions committed in the name of that nation (91).

I do not mind the humanism, the affirmation, the search for hope

Homi K Bhabha in his forward (‘Remembering Fanon: Self, Psyche and the Colonial Condition’ (London 1986)) is a little more skeptical of this life affirmation, this humanism. I like how his thoughts build on Fanon, however, how they situate it in relation to theory now:

When that labourist line of vision is challenged by the ‘autonomous’ struggles of the politics of race and gender, or threatened by problems of human psychology or cultural representation, it can only make an empty gesture of solidarity. Whenever questions of race and sexuality make their own organisational and theoretical demands on the primacy of ‘class’, ‘state’ and ‘party’ the language of traditional socialism is quick to describe those urgent, ‘other’ questions as symptoms of petty-bourgeois deviation, signs of the bad faith of socialist intellectuals. The ritual respect accorderd to the name of Fanon, the currency of his titles in the common language of liberation, are part of the ceremony  of a polite, English refusal. vii-vii

These speak far more eloquently than I do, I think, about what Fanon has brought us:

He may yearn for the total transformation of Man and Society, but he speaks most effectively from the uncertain interstices of historical change: from the area of ambivalence between race and sexuality; out of an unresolved contradiction between culture and class; from a deep within the struggle of psychic representation and social reality (ix)

In his desperate doomed search for a dialectic of deliverance Fanon explores the edge of those modes for thought: his Hegelianism restores hope to history; his existentialist evocation of the “i” restores the presence of the marginalized; and his psychoanalytic framework illuminates the ‘madness’ of racism, the pleasure of pain, the agonistic fantasy of political power (x)

Remembering Fanon is a process of intense discovery and disorientation. Remembering is never a quiet act of introspection or retrospection. It is a painful re-membering, a putting together of the dismembered past to make sense of the trauma of the present. It is such memory of race and racism, colonialism and the question of cultural (xxiii) identity, that Fanon reveals with greater profundity and poetry than any other writer (xxiv).

Again, as always, we come back to the past, to the ways it continues on into the present recalling CLR James a little, Trouillot a whole lot. In just a fragment of a sentence the geographies of the colonial project are invoked, ‘the validity of violence in the very definition of the colonial social space’ (xiv) but I would argue it is as much physical, material space: The arbitrary delimitations of nations, the segregation of living spaces.

To end with this final farewell and celebration of his legacy:

The ‘social’ is always an unresolved ensemble of antagonistic interlocutions between positions of power and poverty, knowledge and oppression, history and fantasy, surveillance and subversion. It is for this this reason — above all else — in the twenty-fifth anniversary of his death, that we should turn to Fanon.  xxv

For more on race and empire…

Archaeology and landscape and seeing what you expect to see

Language and Violence — The Meursault Investigation

Artists and Empire at the Tate

Started a carpentry class at the women's carpentry

From this morning's reading

Someone was pissed this morning...

March! RMT have a brass band! We're sticking with

Found it so hard to think/write/be while an academ