First the nuts and bolts: Frank Lloyd Wright began building Taliesin West in the Scottsdale desert east of Phoenix, AZ in 1937 after his doctor sent him to winter out west for his health. Like the Great Depression wasn’t happening. It was thus built as a seasonal complement to Taliesin East in Wisconsin, and Wright continued work on it every winter until his death in 1959.

The first three years Wright spent the winter living in a tent on the site. His many apprentices as part of the Taliesin Fellowship lived in their own tents, and constructed the building under Wright’s direction. The massive volcanic rocks found on the site and used in constructing the walls were labeled depending on size as one-apprentice, two-apprentice, three-apprentice, four.

It could not have been easy to be an apprentice. The two primary impressions I carried away with me: an amazing moulding (if not micromanaging) of space, and arrogance.

Above all is its horizontality, emphasized through building shape and the use of lines running at the same elevation throughout. They are best seen on the vault — an archive room for all of Wright’s work and built to mirror the mountains — but you can see them appear in almost every picture.

This is one of the unifying features, a second comes from one of the petroglyphs found on the property (moved to become decorational of course, as white people did in those days). What Wright saw as two hands interlocked in friendship:

This can be seen at the entrance, and branded throughout, particularly in the fairly splendid gift shop:

What I liked: the mastery over space. The low ceilings of anterooms that carried you through them quickly, allowed you to feel a great opening up as you entered the main room. The way that he created walls and corners that invited you to explore, hid the full expanse of a room then channeled you through space to experience it fully.

The counter to this? His management of your experience. Inconsiderateness too, as one of those compressed spaces designed to be uncomfortable as it leads you to the office where he worked to impress clients was also the workspace of his secretary. I suppose the effect changes if you are seated?

The height of everything was also absurdly low, I can’t imagine my brother getting through this place unscathed at 6’6″. I am enjoying imagining him seated on the low chairs resting his chin on his knees. Wright claimed he was 5’8″ but was probably 5’6″, and this might explain it all.

Every year the apprentices had to move all of the furniture into the ‘kiva’ (god I hate appropriations of native culture), including at least one piano. Playful twisting entries must have become genuine nightmares.

I loved what he did with light, diffusing it through the room, infusing the space evenly so as not cast shadows on blueprints and drawings. He achieved this through the use of canvas as a ceiling, clerestory windows, recessed lights, floor lights (supposedly invented as Wright loved films and hated ushers using flashlights to help late patrons find their seats). The light was perfect.

Those canvas ceilings however? Every year the apprentices had to take them down and store them after removing absolutely everything from the rooms. Upon their return the following winter, the canvas had to be soaked and restretched. They leaked in the winter rains.

The walls…I didn’t like them initially and on a large scale I am still not too much of a fan. After studying them from within the rooms, however, I did grow to like them more. They were placed with care and artistry. Dark and rounded stones from the bed of a nearby wash complement the large volcanic rocks in shades of ochre, grey and black.

Still, they must have been awash with scorpions and other insect and reptile life. I’d love to have gone over them with a black light back in the first six to seven years of the buildings’ life when the third wife had not yet won her epic battle for the installation of glass windows. The rocks cemented in place with multiple nooks and crannies were perfect for them. I grew up in a never-finished home in the Sonoran desert with little separation between inside and outside. I loved the lizards, liked the snakes, groaned every time we had to chase the tarantulas outside with a broom (or if they were being insistent catch them in the little trash can and take them for a longer walk), and hated the scorpions (I was stung twice and it hurts) and the wide array of other stinging biting things. Especially verdugo bugs that suck your blood and raise welts.  Every morning we fished various large insects from the bath tub. The amazing insectile life attracted to even a single light in the evenings are almost certainly not things you’d want to live with.

Inside/outside is no joke, and screened porches the best of inventions. Still, I like some playfulness with that idea, and love that you can see the mountains through the buildings: 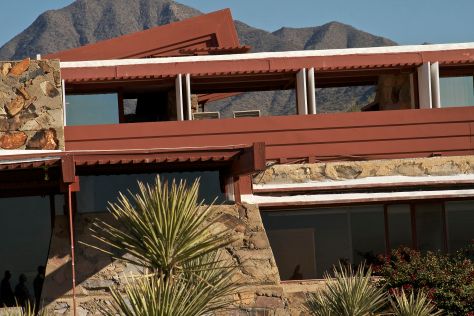 The cold is no joke either. We had no heat growing up, just a little wall heater about a foot high in the bathroom that would warm you one section at a time. Nights regularly get down to freezing in the winter and I know it’s not Minnesota but still, no windows? The most enormous fireplaces I have ever seen in my life (and that includes a hell of a lot of medieval castles)…where did the wood come from?

Apprentices I guess. It’s no surprise his widow installed heating just after he died.

I did like his attempt to avoid framing space to create a structural distinction between inside and outside when the glass was finally installed. On reflection I imagine it was the desert wildlife and rain rather than his wife that probably won that battle. He seemed a very stubborn man.

I almost admired his tenacity over views. When he returned one winter to find that powerlines had gone up between Taliesin and the mountains to the southwest, he wrote to absolutely everyone to get rid of them — and not these big modern powerlines of the picture below, but the little dinky old-school ones stretching from the wooden posts.

He wrote letters to the governor and to President Truman. When they didn’t come through he changed the orientation of the whole complex to focus on the mountains immediately behind them to the north and east, moving the kitchen, closing off an open area with a wall that shielded his guests from the horrors of modernity.

His guests were of the best, of course. Every Sunday he and his wife held formal black-tie affairs, catering to as many of the elite as they could entice to make the long drive.

He also refused to let his wife plant citrus trees. Again, he cared more for the views.

I think what troubled me most was that despite Wright’s insistence on natural materials found in the area, despite this house being designed for the desert, it fails to be an ecological house in a number of ways. I was a little troubled by his rejection of European architecture while embracing a strange orientalism to transplant here — both in the Chinese porcelain theatre scenes scattered at transition points throughout:

As well as in a number of other elements: 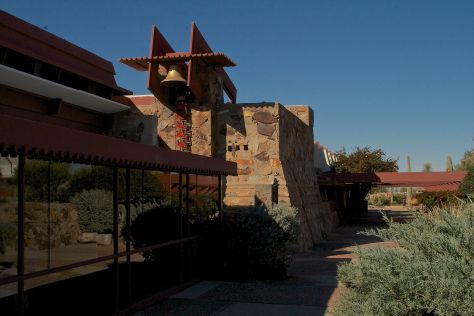 Despite this, it still feels to me like the midwest transplanted. Adobe walls work so much better than stone and concrete to insulate rooms, both for summer and for winter. There was some talk of passive solar using concrete floors and such, but with so many completely open spaces (particularly before the glass was put in), and these walls, the inefficiency of giant fireplaces and no wood stoves…cold. That place must have been so cold.

He also built this house thinking there was no water on the property. They brought it all in on a flatbed truck making weekly trips. Both crazy and unsustainable. They’re lucky they drilled and actually found plentiful water, but they created a landscape that hardly blends with the environment, though I’ll admit its usefulness in case of fire and to soak the canvas ceilings. The grass might have been a nod to the families with young children, but this isn’t precisely a good area for playing in: 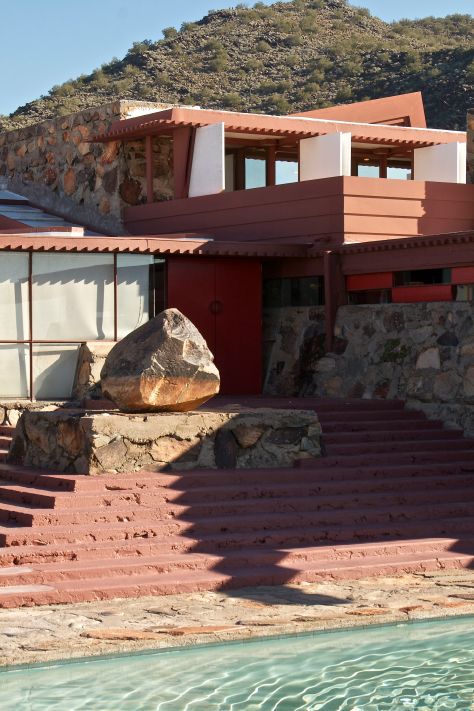 I do really love this door, the use of this splendid boulder. In every Wright house I’ve visited there are always places and views I truly love.The interiors especially, and the large living room and office and workspace for the apprentices were no exceptions to this (though I couldn’t take pictures).

I loved the performance spaces as well, the large theatre and the cabaret. I enjoyed his mastery of accoustics and the amazing sound of a tiny music box when amplified by the recess containing the piano. It was probably his favourite parlour trick.

I was horrified that all of his apprentices had to perform.

I kept thinking this house must have been impossible to keep up, kept remembering that with his apprentices Wright had a small army to do so. While my heart consistently bled for the apprentices, this brings me to the final thing I really did like about this place — its role as both a workplace and living space, a laboratory, a community. A place to learn by doing. It must have been an amazing experience, although a very difficult one that I doubt my temperament would have allowed me to participate in. Still, it must have been most rewarding for those who did, and many have stayed on. They certainly earned their places.

A few more views of the things I did really like, despite all the critiques:

Other Architecture in the Desert posts:
Arcosanti | Before ‘Architects’ | Mining Zombies, Cadavers and Ghosts

3 thoughts on “Taliesin West: Architecture in the Desert 1”