I have few words for Ferguson, for yet another Black kid shot and killed and no justice for the killing. I sit and think about what I should say, and there is so much to say, but mostly it just hurts my stomach and my heart, and the screen blurs. Still, I have to say something.

At the centre of this is a young life lost to us. Someone here who lived and breathed and laughed and dreamed, and who is not here any longer. Whose last moments were of pain and fear. Surrounding that terrible new wound of an absence is the pain of families and friends and those who loved him. That pain will stretch forever into the future. We never stop mourning the loss of those we love. Surrounding that, the pain of the wider community, the reawakened trauma of all other families who have survived these same circumstances around the world, and the pain belonging to all of us who grieve. There is also an ever deepening fear among youth that they could be killed at any time, and among parents that they could lose their children whenever they leave their homes. And of course, there is an intense anger. Because no one should suffer this ever. Because things like this should never happen. Because if this does happen, our society needs to take steps to find justice and do whatever it can to ensure it does not happen again. Instead it does worse than nothing — it blames the dead.

Because all of this intense pain and suffering that marks one grouping of reactions to this murder sits encompassed within a larger, and much whiter group of people across the nation that does not value Black life, does not value Black children, does not see these children as its own to love and protect and cherish. Instead it fears them, it desires protection from them, and it refuses to convict those who kill them in the name of that defense. It is a tragic split that is eating away at the U.S., that perhaps has already destroyed it because this goes so far back. My only hope is in the communities coming together to stop this, end this, change this. People bridging old boundaries and fears. A growing dialogue about just how bad things are and how things have to change. That is the only way that hope lies for everyone.

But so many lives have been lost. It has been good, actually, to go through this, to share this, through my social media community. There was this posted, that made me cry:

I have gone through the violent death of a child with one family I love well, and a piece of my heart was literally burned away by their grief, and the sound of Maria screaming over his grave will echo forever in my ears. I hear it every time a child is killed.

More intellectually, there is James Baldwin to educate about the measure of justice:

Well, if one really wishes to know how justice is administered in a country, one does not question the policemen, the lawyers, the judges, or the protected members of the middle class. One goes to the unprotected — those, precisely, who need the law’s protection most! — and listens to their testimony. Ask any Mexican, any Puerto Rican, any black man, any poor person — ask the wretched how they fare in the halls of justice, and then you will know, not whether or not the country is just, but whether or not it has any love for justice, or any concept of it. It is certain, in any case, that ignorance, allied with power, is the most ferocious enemy justice can have.

More from Baldwin on Martin Luther King’s assassination is here from Esquire Magazine, from 1968 and I can’t believe we’re still in the same place. This encapsulates what is happening now:

Q. How can we get the black people to cool it?

James Baldwin: It is not for us to cool it.

Q. But aren’t you the ones who are getting hurt the most?

James Baldwin: No, we are only the ones who are dying fastest.

There’s this from the Howard Zinn page, just a handful of collected stories of the many Black men who have been shot in cold blood, whose murderers were known, and where justice has still been denied:

The below stories are from the Onion. 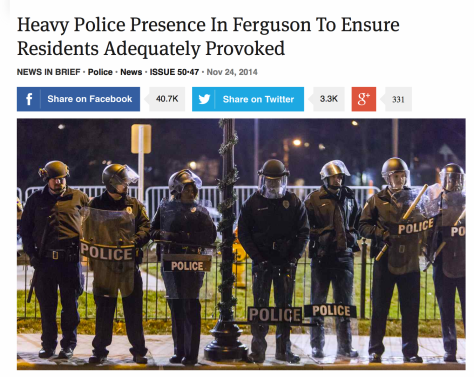 That’s from before the decision, because all of us were afraid this would happen given our country’s track record over several hundred years. This headline could not state better how many of us feel I think:

And this breaks my heart all over again, because it is all true:

Tips For Being An Unarmed Black Teen

With riots raging in Ferguson, MO following the shooting death by police of an unarmed African-American youth, the nation has turned its eyes toward social injustice and the continuing crisis of race relations. Here are The Onion’s tips for being an unarmed black teen in America:

I’m noticing more and more that the Onion can no longer practice satire, because our society has reached the point where satire is impossible. These are literally the conversations my friends are being forced to have with their children. It breaks my heart. Just like being here, in London, through all this. Massive protests are happening all over the U.S., including my friends taking the streets back in L.A. I am so proud. What else is there to do when nothing else is creating change? I am also proud of the movement coming out of this, the demands as they are being developed by Ferguson protestors and the invitation to comment and contribute to this struggle that affects all of us, but people of colour as the most vulnerable to institutional violence most. I am proud to follow their lead, wherever they choose to take this fight. Take a look, comment, support. They are:
Demand #1 — Political Accountability for the Death of Michael Brown, Jr.

Demand #3 — Police Held Accountable for Use of Deadly Force

Demand #4 — End Overpolicing and the Criminalization of Poverty

Demand #8 — The Right to Protest

Here in London we at least were able to show solidarity and thankfully made the BBC news to do so, to send as much support from one city to another, one people to another. Hopefully put just a little more international pressure on the federal government to step in. Sadly, our nations are too connected in the ways Black men are killed and justice never comes, and changes are desperately needed in both places.

One of the most powerful things I’ve seen has been this collection of artwork emerging over twitter from Shirin Barghi @shebe86, the last words of Black people shot dead in recent years. Their names are so familiar, and they are only some among many: Kendrec McDade, Sean Bell, Oscar Grant, Kimani Gray, John Crawford, Amadou Diallo, Eric Garner, Kenneth Chamberlain, Trayvon Martin. In the UK it is Mark Duggan, Sean Rigg, Smiley Culture, Stephen Lawrence, again among too too many others. Carole Duggan spoke at the London protest, and it struck me when she said that we will be fighting injustice for the rest of our lives. So be it. This needs to end, and we all need to be part of ending it.

One thought on “The Broken Heart of Ferguson”

Finally those lazy magpies doing their part out in

Not spring, but I am pretending

For the first time this winter the sun is out AND

Today I confirmed the back of my yard is indeed ba

Finally a chance to go for a lovely lonely walk in