Odilon Redon…I saw him for the first time (that I remember) today at the Chicago Institute of Art, and found him extraordinary. Born in France in 1840, he created these beautiful works in black and white, charcoal and lithograph, strange combinations of human and plant, animal, and insect. This is the one I found 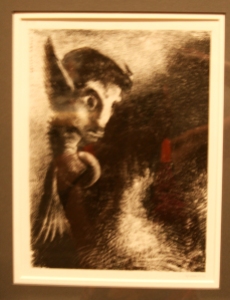 This was called Chimera…and more, but I didn’t write it down and the light was terrible, the images blurry. Redon kept to himself, remaining almost unrecognized until the end of his life although he heavily influenced surrealism. He only became generally known after being mentioned in a cult novel by Joris-Karl Huysmans, Against Nature. Which sounded intriguing, but I believe I have read enough novels of decadence for the moment, it might have inspired Oscar Wilde but was influenced by Schopenhauer and he certainly isn’t one of my favourite philosophers.  So. Another image from google because I love these…

Tree man. Additional information is slim, he’s one of those artists to learn more of…as is Honore Daumier. There are a couple of brilliant little satirical sketches and this truly amazing collection of  miniature sculptures

They capture the spirit of the individual with a delightful intensity and quickness, it must have been even more impressive in his own day knowing the politicians and public figures so captured. My favourite:

As far as big names go, there are plenty of my favourites here, and a whole room of Toulouse-Lautrec! But today I most enjoyed the hidden, the weird, and the wonderful…no flash allowed so my apologies for quality

Who knew Delacroix had ever drawn anything like this? It’s called Marguerite’s Ghost

They had one print by Durer, who fills religious paintings with the most fantastic creatures

And this sculpture by Jean-Joseph Carrie

Frog Man. I have never seen anything like it. And this shield from an assorted saint facing the devil

And time with my family, a great day.

Not spring, but I am pretending

For the first time this winter the sun is out AND

Today I confirmed the back of my yard is indeed ba

Finally a chance to go for a lovely lonely walk in